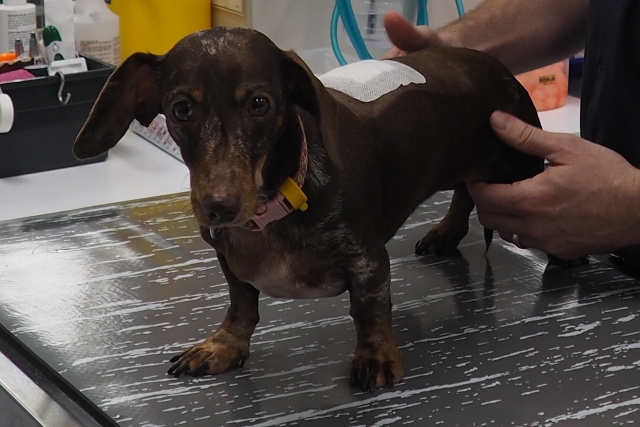 It´s not just Daxie´s that get IVDD

Some breeds are more susceptible to intervertebral disc disease (IVDD), with Dachshunds sadly having a reported 20-60% incidence rate throughout their life-time. Researchers have only recently isolated the gene responsible for IVDD in certain breeds. This gene is the same one that causes dwarfism in dogs. This is why the overwhelming majority of IVDD cases are seen in dogs with short limbs. It is important to note that while IVDD is the underlying condition, it is intervertebral disc herniation (IVDH), which most commonly occurs in degenerate or diseased discs, that leads to neurological pain and dysfunction.

For other short-limbed dogs such as the beagle, Maltese Terrier, Shih Tzu, cocker spaniel, Lhasa apso, French bulldog, Pekingese and Staffordshire bull terrier the life-time  rate of disease is approximately 10%, compared with 2% in other breeds.

That said, we do see large breed dogs in at ARH with disc disease, and it´s important for all owners to be on the lookout for the signs of IVDH, no matter the size or shape of their dog.

Some dogs have few symptoms

The classical picture of IVDH is a dog that is paralysed in its back legs. At a minimum, a dog with IVDH will typically show wobbliness or weakness in their limbs. However, at ARH we see a number of dogs who show lesser recognized symptoms of IVDH. These may include a reluctance to jump, interact with other dogs or even lameness of a single limb. Such instances can often be the result of a very lateralized disc herniation that results in spinal nerve compression and pain, which often requires surgery for resolution.

Not all dogs need surgery

At ARH, we generally recommend surgery for cases of IVDH with neurological signs or intractable pain. However, we regularly see cases where on CT or MRI there is only minimal spinal cord compression, or others where there is obvious cord compression and only mild clinical signs. These are some of the instances where we often advise what is called non-surgical or conservative management, which consists of a period of strict crate rest, anti-inflammatories and other pain relievers.

IVDD doesn´t always occur in the back

15-20% of clinical IVDH cases occur in the neck which often has different symptoms to IVDH of the back. Dogs may have lameness in one or both of their front legs, and altered behaviour due to their pain. This can include reluctance to drink or eat, or anticipatory pain when a human or another dog approaches.